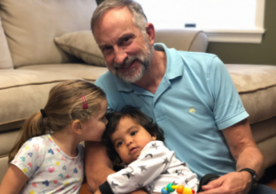 Jim Leitner ’75 cordially invites you to join the current and future generations of midwives and nurses to do no less than change the world.

Actually, he enthusiastically invites you, which is how he does everything. Visitors to the Leitner Family Observatory and Planetarium at Yale College understand his inquisitive nature and passion for exploration and discovery, characteristics he applies energetically in his role as the new chair of the Dean’s Leadership Council (DLC).

“Midwifery is my favorite subject,” Leitner said. “I love reading about it and thinking about it. But everything

about Yale School of Nursing is special. We bookend life from birth to death with our programs. Being on the DLC is being at the center of life and how to make it better for everyone.”

He immerses himself in the data, citing the 2014 landmark Lancet journal midwifery series edited by YSN Helen Varney Professor of Midwifery Holly Kennedy PhD, CNM, FACNM, FAAN; the Varney’s Midwifery textbook written by a former YSN faculty member; and the Sustainable Development Goals championed by the United Nations, specifically 3.1 and 3.2, which focus on maternal and neonatal mortality.

Leitner’s nursing origin story began about 20 years ago. Standing in line for an event at the MacMillan Center on the university’s main campus, he started talking to another attendee about how nursing was on track to become a globalizing force.

A woman ahead of him in line heard his remarks and chimed in that she was a midwifery student at YSN. Their conversation progressed to discussing the challenges of achieving enough midwifery clinical hours in Connecticut, and Leitner, who grew up primarily in Istanbul, wondered if students could more easily secure their experience abroad.

“I reached out to some people at Yale to vet the idea.” Leitner said. “In South Africa, when gold miners go home for Christmas, there is a baby boom around August. Could we send YSN midwifery students to South Africa to help them get practical hours?” All the pieces came together, and the trip was a great success.

“As I look back, I had three objectives,” Leitner said. “First, I wanted an experience which was very student-centered and for the students to really get something out of working in unfamiliar territory. Second, I always wanted faculty to be able to publish cutting-edge research. And third, I wanted to help build capacity wherever we were going. When those three things come together, it is like winning the lottery!”

That first trip to South Africa led to more sojourns abroad, and Leitner has more recently funded student trips to Makerere University in Uganda and the birthing center there.

“I’ve always felt I should support the schools where students, once they graduate, don’t make that much money,” Leitner said. “These nurses are doing fabulous jobs, but their remuneration makes it difficult to pay off their student loans and build and support a family. If we can expand what we do for our nurses, we will make the world a better place. One of the areas I want to focus on is financial aid.”

Leitner sees the DLC as a tool to help advance the school’s mission through working groups, pooled rolodexes and a dedication to building on the school’s strengths.

“Over the next decade we are going to need many, many professors of nursing. I think one of YSN’s specialties is that we can create that cohort of graduates who not only themselves go out into the world as clinicians, but who also teach others.”

Leitner also see Yale’s convening ability as a great asset that could be utilized more often.

“There are many areas where the United States is behind in global health, and YSN can play a role to convene great thinkers, clinicians, funders, and other interested parties to help change that. For example, a conference at YSN focused on maternal mortality could establish paths to improving this problem which is a stain on our moral fabric and tightly intertwined with systemic racism. I think experts from around the world would be happy to meet at Yale and tackle problems of this nature in a collaborative way.”

The Next Yale Campaign

A veteran of multiple Yale fundraising cycles, Leitner sees YSN as well positioned for the science-focused campaign that is scheduled to launch in the fall of 2021. He sees it as looking outward to a global audience, not only inward to Yale itself.

“The next campaign is poised to focus on Yale’s role in the wider world,” Leitner said. “One area I want to highlight is the Planetary Solutions Project, a collaborative approach to addressing global issues in health and climate change. Here the Yale Nursing School’s slogan ‘The world is calling. We answer’ is a central expression of our mission-driven approach to nursing. As a preeminent school in the education of midwives I could see Yale addressing a systemic problem in neonatal and maternal mortality by working on long-distance education for a midwifery certificate.”

Leitner views partnerships across the university as a terrific asset for tackling big problems.

“Collaborating with the School of Public Health, the School of Medicine, and the Department of Economics for randomized controlled trials (RCTs); the School of Architecture for approaches to healthier cities; and the School of the Environment for input on environmental factors could in its totality lead to significant improvements in these deep-rooted health issues in the US and around the world.”

“If Yale could move the needle on the Sustainable Development Goals 3.1 and 3.2, the world would be a better place. It is this kind of global problem the Planetary Solutions Project needs to address to be relevant and appeal to donors who do not have a Yale connection presently. Everybody has seen the work nurses have done on the frontlines during COVID, and nurses everywhere have earned deep respect for that role. People and funders are starting to understand that today’s nurses must and can play a role in all deep-seated health issues that need a systemic approach for their solution.”

this article and many more can be found in the newest issue of yale nursing matters, read more.