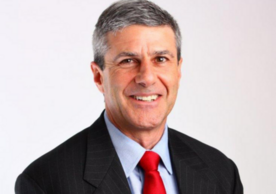 Yale School of Nursing (YSN) welcomed David P. King to the Dean’s Leadership Council (DLC) in January. The DLC group of YSN supporters includes Yale alumni and friends who offer professional expertise and support to one of the world’s top nursing schools.

“David brings terrific business acumen, strategic vision, and a great depth of health experience to this role. We are absolutely delighted to welcome him to the DLC,” said Dean Ann Kurth ’90 MSN, PhD, CNM, MPH, FAAN.

King previously served as executive chair, non-executive chair and CEO of Laboratory Corporation of America Holdings (Labcorp), leading it through a period of sustained growth to become the world’s largest clinical laboratory and second-largest drug development business, as well as to inclusion on Fortune’s List of the World’s Most Admired Companies.

The DLC also aids in fundraising efforts, and Yale launched its most recent campaign in October 2021. The “For Humanity” campaign aims to raise $7 billion.

“David understands the world of health so well, and he knows how inspiring big ideas can be,” she said. “As we approach our centennial next year, Yale School of Nursing is looking forward to celebrating the past century and positioning for impact for the next 100 years.”

King’s extensive commitment to community service includes serving as board chair of PATH, a nonprofit global health organization; board member of Novant Health, a multi-state integrated health system; member of the advisory board and executive committee of Duke University’s Robert J. Margolis, MD, Center for Health Policy; and, board member of The Emily K Center, a college-readiness center founded by Duke Men’s Basketball Coach Mike Krzyzewski in Durham, North Carolina.

King previously served on the board of Cardinal Health, a Fortune 20 healthcare company, and the American Clinical Laboratory Association, where he served as board chair from 2010 to 2014.