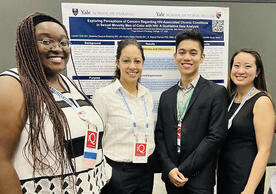 As an alumnus of the Research Education Institute for Diverse Scholars (REIDS) at the Yale School of Public Health, S. Raquel Ramos understands the value of mentorship and opportunity in academia.

Now an associate professor at the Yale School of Nursing with a joint appointment in the Department of Social and Behavioral Sciences at YSPH, Ramos is carrying the REIDS’ mission forward by mentoring three MPH students in the interdisciplinary research she conducts at the intersection of nursing and public health.

“Being a part of REIDS and the Yale School of Public Health was really influential in how I thought about the synergistic relationship between nursing and public health,” Ramos said. “When I was a graduate student, I wanted to know more about research, but I did not have opportunities to explore that curiosity until I started my predoctoral studies. I believe that early exposure and ongoing engagement in research activities is important to the development of future clinicians and researchers who will be leaders in nursing and public health.”

Ramos attributes her inspiration to her own mentor Susan Dwight Bliss Professor of Public Health (Social and Behavioral Sciences) Trace Kershaw, department chair and director of the REIDS program. Located within Yale’s Center for Interdisciplinary Research on AIDS (CIRA), the REIDS program aims to increase the number and impact of racial and ethnic minority researchers dedicated to reducing HIV inequities in communities of color, with particular emphasis on early-career faculty and post-doctoral researchers.

In Ramos’ lab, students have the opportunity to engage in research activities using an interdisciplinary approach. As a result, three MPH students working in the lab — Lauren Chin, Maame-Owusua Boateng, and Andre Parrilla — recently presented multiple poster abstracts at research conferences and are also contributing to two manuscripts that are in progress. This past November, they presented a poster at the American Public Health Association (APHA) scientific sessions.

Ramos’ lab is currently investigating how a web-based platform could be leveraged for heart disease prevention education in gay and bisexual men with HIV in New York City, in the “LEARN Study”. Prior research has shown that Black and Latinx sexual minority men with HIV are at higher risk for developing cardiovascular disease. Ramos’ research utilizes a mixed methods approach. With this approach, Ramos’ research team is collecting both quantitative and qualitative data using community-engagement and then applying that information in the design of technology-driven health interventions to make a real-world impact. Working with HIV programing administrators and clinicians, Ramos hopes to tailor the intervention by centering community voices in the design of a virtual environment for enhancing cardiovascular health.

“I believe that early exposure and ongoing engagement in research activities is important to the development of future clinicians and researchers who will be leaders in nursing and public health.”

Through studies like this, Ramos is committed to creating a space for research collaboration at the intersection of nursing and public health. Students working in Ramos’ lab have an opportunity to learn new research skills in areas such as analyzing survey and focus group data, scientific manuscript development, and approaches to research dissemination. Under Ramos’ mentorship, they have also gained experience in presenting research at scientific meetings.

A Focus on Chronic Illness

“I grew up in a Southern California community where nearly everyone around me was a person of color and often health advice such as eating vegetables like kale and spinach just didn’t fit in with our local diets and dishes,” she said.

While Chin used to be primarily interested in infectious diseases, her focus has shifted toward chronic illnesses such as cardiovascular disease, type 2 diabetes, and HIV.

“[These chronic conditions] have not gotten the attention they deserved during the pandemic as these underlying conditions can result in worse health outcomes later in life and in combination with infectious diseases like COVID,” she said.

Chin said her experience in Ramos’ lab has given her the unique opportunity to participate in a collaborative environment encompassing both public health and nursing.

“I love having the opportunity to work with students and mentors from other health professions as they add a different perspective to our collective projects,” Chin said. “Engaging in research with both public health and nursing colleagues has allowed me to learn new terminology and see how a health colleague would approach a problem as compared to what I’ve been taught in my public health training. This also allows us to better tailor our manuscripts to our academic audiences or when presenting at conferences and to simplify the educational material we use in our virtual environment while still maintaining scientific accuracy.”

Maame-Owusua Boateng, MPH ’23, also found her time in Ramos’ lab invaluable in terms of the exposure she has received to collaborative research across fields.

Boateng came into the lab with an interest in researching intersectionality and cultural humility in health intervention. Despite having never done qualitative research before, Boateng said Ramos helped her make the transition into the field. In Ramos’ lab, Boateng is involved with the LEARN Study. By utilizing qualitative data, Boateng believes researchers can better determine the most appropriate interventions for affected communities.

Her experience in the Ramos lab has shifted her perspective.

“This experience is making me consider doing an MD/PhD and possibly combining medicine with a subject in the humanities like sociology or history of science and medicine to truly explore the cultural phenomenon specific communities face and how to raise their voices and become advocates for them,” Boateng said. “All of this blends public health concepts in creating health equity for all.”

Andre Parrilla, MPH ’23, has had a similarly rewarding experience in Ramos’ lab. His primary focus within the lab has been creating a holistic 16-module cardiovascular health education curriculum for queer men of color living with HIV and at risk of heart disease.

He said that his time in Ramos’ lab has affirmed his passion for public health. “It was rewarding to be a part of research with Dr. Ramos and to be able to network with others who share similar interests and goals of promoting health equity among marginalized communities,” said Parrilla. “I have learned a lot throughout this process and definitely see myself continuing this research as a future LGBTQ+ physician.” Ramos is the primary mentor of Parrilla and Chin’s master’s thesis using data from Ramos’ HOTIE study.

Ramos has over a decade of direct patient care experience as a nurse and advanced practice clinician in the areas of critical care, interventional cardiology, LGBTQ+ health, long-term care, and HIV clinical research. She has received multiple federal awards and subawards and is currently funded on two NIH/NHLBI studies. She is a recipient of the prestigious 40 Under 40 Leader in Health Award from The National Minority Quality Forum. In 2022, she was inducted as a Fellow into the New York Academy of Medicine. Ramos was a postdoctoral associate at the Yale School of Nursing. She earned her PhD from Columbia University and her MSN, MBA, and BSN from Purdue University.

Ramos believes that by building a connection between public health and nursing, researchers will be able to better create holistic, tailored, community-informed interventions that can best support the needs of marginalized communities.

The application cycle for the 2022-23 REIDS cohort is currently open. The deadline to apply is Friday, February 24, 2023. Learn more about the REIDS program here.

This article was first published by the Yale School of Public Health.