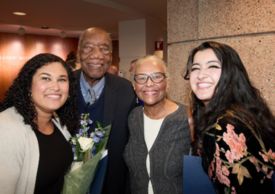 As she welcomed the crowd to the New Nurses Celebration on October 6, Yale School of Nursing (YSN) Associate Dean of Student Life Erin Morelli ’02 MSN, CNM, CLC, RN, FACNM, encouraged the nurses and midwives to look beyond a patient’s physical assessment to learn their individual story.

“When we talk about history-taking as part of the diagnostic process, we often forget that ‘story’ is right in the word ‘history.’ Just like how each of you has a story that led up to this special day, your patients have stories, too,” Morelli said.

“When you meet patients in the clinical setting, don’t forget that there is so much more to them than labs, vital signs, OLDCARTS, med lists and physical assessment. Pour over their charts, talk to them, get to know their families and support people. Make sure you learn their story; it’s a crucial step to ensuring better health for all people.”

The ceremony in the Grace Hopper Auditorium at the West Campus Conference Center honored the students who have completed the Graduate Entry Prespecialty in Nursing (GEPN) program, the first year of a three-year course of study. It also recognized new Registered Nurses (RNs) who joined the school this year to continue their education as advanced practice clinicians.

Family Nurse Practitioner student Cheryl Canty ’24 MSN, Co-President of the Student Government Organization, saluted the group for the many ways in which it has bonded as classmates, graduated students, and most importantly: nurses.

“I have seen the positive change this cohort is capable of: I have seen it with the organization of a meal train to support a fellow classmate, in the classroom when advocating for fair and equitable treatment of our future patients, and even outside the classroom when gathering to advocate for policies and practices we feel strongly about,” Canty said.

“I also see this passion with the RN-entry students, when on the cusp of a mass healthcare workforce exodus, they decided to further their education in nursing to provide better care for their communities. They saw a need in health care, and instead of turning away they are here answering the call. This is what it means to be a Yale nurse.”

A History of Leadership

In her remarks, Dean Ann Kurth ’90 MSN, PhD, MPH, CNM, FAAN, FACNM welcomed the students to a proud tradition of nurse leadership stretching back to the school’s first dean Annie Warburton Goodrich, the first female dean ever at Yale. Dean Kurth continued by highlighting obstetrical nurse Elouise Collier Duncan, who blazed her trail as the school’s first African-American student when she graduated in the Cadet Nurse Corps in 1946.

In addition to celebrating its centennial in 2023, YSN is also looking ahead to the following year, which marks the 50th anniversary of the introduction of hospice care to the United States. Former dean Florence Wald brought the model of care to Connecticut in 1974.

Dean Kurth also pointed to Dr. Lynn Malerba, 18th Chief of Connecticut’s Mohegan Tribe and a 2015 graduate of YSN’s Doctor of Nursing Practice (DNP) program, recently sworn in as Treasurer of the United States and the first Indigenous woman to hold the role.

“I believe that more than any other professional school at Yale, the students who are drawn to nursing bring the deepest of commitment and breadth of experience to apply to our aspirational mission. We don’t achieve that mission every day, at our school and in society, but we do commit to staying on the path towards it – towards the goal of more equitable health in our communities, our country, and for the planet itself.”

YSN would also like to recognize each of our incoming RNs: