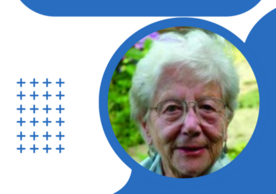 As Yale School of Nursing (YSN) looks ahead to its centennial in 2023, a second milestone is approaching the five-decade mark the following year: the arrival of hospice care in America, spearheaded by the efforts of YSN Dean Florence Wald.

Florence Schorske Wald ’41 MSN, RN, MN, MS, FAAN, is a member of the National Women’s Hall of Fame, was recognized as an American Academy of Nursing Living Legend, and received an honorary Yale degree in 1995. She led the school as its fourth dean from 1959 to 1966 and is credited with bringing the hospice movement to the United States from England, establishing the first hospice office in 1974 at Albertus Magnus College in New Haven, Conn.

Barbara L. Pearce currently serves as the interim CEO of Connecticut Hospice in Branford, Conn., the mature facility stemming from that first unit established primarily for cancer patients nearly 50 years ago. It was recently reaccredited with a unique combination of licenses: it is the first and only licensed in-patient, home care, and acute care specialty hospital in the country, and its status as a certified advanced palliative care facility also set a national standard. Pearce said Wald’s influence is still keenly felt today, locally and beyond.

“When I started here in 2019, I asked the nurses what they would want if I could do anything for them, and the first thing they requested was a portrait of Florence,” Pearce said. The new art piece arrived last year and was painted by the daughter of a retired hospice nurse.

According to Pearce’s research among Wald’s papers at YSN, Wald attended a speech given by hospice pioneer Dr. Cicely Saunders at Yale School of Medicine and was then compelled to follow Saunders’ tour to Philadelphia for an encore. Saunders is recognized for her work founding St. Christopher’s Hospice in London in 1967 and received an honorary degree from Yale two years later.

In many ways, Pearce’s personal history dovetails with Connecticut Hospice and YSN. Her father was instrumental in securing the current waterfront property 20 years ago. He set up a named scholarship at YSN in honor of her mother, alumna Margaret Perry Pearce ’45 MSN.

“I was brought up to think that the best thing you could be in life was a Yale nurse,” said Pearce. “My mother went to YSN and taught there and was also a psych Army nurse. She must have known Florence Wald.”

According to Pearce, when Wald was exploring hospice care, doctors in America thought it was their job to cure people, not help them die. Physicians did not use the word “cancer” when talking to patients, and children were not generally told what was happening to their parents.

“Florence appears to have been a force of nature,” Pearce said. “She was willing to go toe to toe with doctors, and her first staff included a surgeon and an oncologist but also ministers and a nun. And today hospice is a very nurse-centric place: the nurses are providing a service that no one else can.”

To people who might think of her job as a bit melancholy, Pearce is adamant in her opposition.

“People always say to me ‘This must be so depressing.’ But this place is anything but depressing! It is a rare thing to be able to provide joy at the end of someone’s life,” Pearce said. “My father died here, and I’ve welcomed many patients that I know from the community. I’ve seen them plan wonderful deaths where our nurses and staff take care of everything the patient has chosen to do. We feel our job is to give closure to people in whatever form that takes.”

Many YSN students have taken clinical placements at Connecticut Hospice over the years, including during the COVID-19 pandemic. Pearce said students are well-placed to come away from the experience with an appreciation for the unique role hospice nurses play.

“My favorite thing about hospice care is that if someone needs help and it’s too late for anyone else to help them, our nurses can still make their lives better,” Pearce said. “We don’t want our patients to die alone, afraid, or in pain. We make sure that doesn’t happen.”