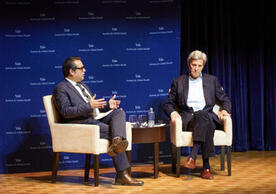 Former U.S. Secretary of State John Kerry ’66 B.A., ’17 L.L.D.H. said the United States must reassert itself as a global leader if we are to address the threat of climate change and other global health challenges in a world steeped in political discord.

During the first in a series of global health speakers sponsored by the Yale Institute for Global Health (YIGH) and the schools of nursing, public health, medicine, Kerry said it is critical that the United States shoulder its international leadership responsibilities and resume its role as an “indispensable nation” to help the world counter the enormous challenges that lie ahead.

Kerry shared that America’s attention to global health is not just an exercise in “soft power” but something vital to the safety and security of the U.S. and countries around the world. The U.S., for instance, also played an important role helping stem an emerging Ebola outbreak during President Barack Obama’s administration.

With COVID-19, the novel coronavirus, threatening the health of millions, and other global health challenges being driven by climate change, Kerry said it is imperative for the U.S. not only to get involved, but to lead. “We are on the cusp of a new age of health threats,” he said. “I don’t want to sow fear, but it is a scary time largely because we’re not responding adequately, we’re not preparing, and we’re not educating people about it.”

Speaking directly to the Yale audience, Kerry charged the individuals currently involved in the natural sciences, medicine, nursing, and public health, with a critical role in what he described as “a genuinely perilous moment” and “the fight of our lifetime.”

“We have to organize ourselves in a way that takes advantage of our technological skill, our innovative skill, and our entrepreneurial capacity.”

“You all have a big part in this battle because you are the folks who, within the various strata of society, have credibility,” he said. “You are the validators of things that people in public life have lost the ability to validate. We are trapped in a place in our politics where there is no referee for truth anymore.”

Nowhere has that battle been more evident than in the climate change debate. Kerry voiced his frustration with the United States’ lack of leadership in pursuing the goals of the landmark 2015 Paris Agreement on climate change. “What confounds me and angers me is that we do not have the leadership that is summoning the world to the table to treat this like a war, which is literally what we have to do,” he said.

Yet Kerry noted there is still room for optimism.

Despite the ongoing use of coal-fired power plants around the world and financial institutions investing more than a trillion dollars in future coal power, there is still a chance the damage from climate change can be checked. “We have to organize ourselves in a way that takes advantage of our technological skill, our innovative skill, and our entrepreneurial capacity,” Kerry said. “If we can do that, we can win this battle still. We appear to be going in the opposite direction.” He cited the failure of last year’s international climate change conference in Madrid to set metrics for countries that have pledged to reduce greenhouse gas emissions, one of the driving forces behind our warming planet.

“The problem is not our capacity to do it,” he continued. “It is our lack of will power and the lack of seriousness of purpose on a global basis, and that is what leadership is supposed to be about.”

To galvanize an international response to fight climate change, Kerry has launched World War Zero, a bipartisan, international effort to engage voters and make climate change a key issue in upcoming elections. Kerry noted that younger voters, those 18-25 and with the most at stake in the climate change battle, must get more involved. Their turnout in the last presidential election was just 19 percent.

“If we can get that voter turnout to 40 percent, 50 percent, or 60 percent, we are going to win back our future in this country,” Kerry exclaimed to sustained applause.