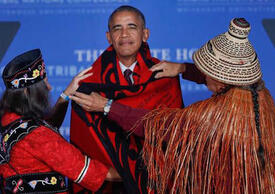 Yale School of Nursing (YSN) alumnus Dr. Marilynn “Lynn” Malerba ’15 DNP will make history as the first Native American to serve as Treasurer of the United States, and when her signature appears on the nation’s currency, it will be the first inked by a Tribal leader and Native American woman.

Dr. Malerba became the 18th Chief of the Mohegan Tribe in 2010, a lifetime position. She is the first female Chief in the tribe’s modern history, and her previous experience includes serving as the chairwoman of the Tribal Council and in Tribal Government as Executive Director of Health and Human Services.

“I am honored to serve in this role,” Dr. Malerba said. “It is history in the making to be the first Native American Treasurer of the United States. Nurses have so many skills that are translatable to other career opportunities, especially in the policy realm. I encourage all nurses to make a difference at the highest levels possible.”

“Dr. Malerba is a high-performing, thoughtful leader who has applied her work in systems leadership and policy to improve the health of Native Americans. Her DNP project work, Indian Health Funding: Time for Change raised awareness of the resource and funding issues in Indian Health Services. Since her graduation, she has been generous in sharing her deep expertise and insight with our students, and we all send her our warmest congratulations.”

In her healthcare career, Dr. Malerba worked as a registered nurse and was the director of cardiology and pulmonary services at Lawrence + Memorial Hospital in New London, Conn. During her years at YSN, she was recognized as a Jonas Scholar.

As Treasurer, Dr. Malerba will oversee the US Mint, the Bureau of Engraving and Printing, and Fort Knox, and she will serve as a liaison with the Federal Reserve. She will also lead the newly created Office of Tribal and Native Affairs within the US Treasury.

“I am deeply honored that Chief Malerba will serve as the nation’s Treasurer and spearhead the department’s new Office of Tribal and Native Affairs. This is an historic appointment,” Yellen said. “Her leadership and experience will deepen our commitment to help expand economic opportunities for all Tribal communities.”