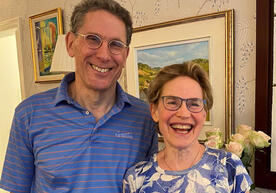 Linda Rodman ’73, ’75 MA, in partnership with her husband, Larry ’16 MEM recently made a $6 million gift to Yale School of Nursing (YSN)—the single largest in the institution’s nearly 100-year history—and they are now saluted as the most generous Yale alumni donors to YSN. The Rodman Family Professorship creates a new full-time ladder faculty position that will be held by an expert devoted to gerontology in their research, teaching, and practice.

Rodman cited multiple inspirations for the extraordinary commitment to YSN, including interactions with outstanding hospital nurses who recently cared for her aging mother and the dedicated team that helped her daughter through preeclampsia during delivery of her babies. Her interest in gerontology was fueled by her societal observations as a leadership consultant and executive coach.

Rodman also cited some statistics as representative of the trend: “By 2030, all baby boomers will be over 65, and this age group will then represent 20% of the US population. Also, Mercer estimates that by 2025 (a mere four years out), the US will face a collective shortage of about 500,000 home health aides, 100,000 nursing assistants, and 29,000 nurse practitioners.”

Rodman’s view is that much of that shortfall in care will pertain to the gerontological population. So, the need for expertise and dedication to the area is compelling.

“There is a tsunami of people entering the golden years now and not enough focus on them. A significant portion of the burden of taking care of this aged population will be nurses, and we wanted to enable Yale to be at the forefront in addressing this pressing need.”

Dean Ann Kurth ’90 MSN, PhD, CNM, MPH, FAAN described the forward-looking gift as a powerful tool for attracting top talent and a welcoming signal to other philanthropists who value Nursing’s mission to bring better health for all people.

“This new endowed professorship will complement the school’s robust strength in gerontologic nursing and establish a secure future for research and teaching to produce new generations of nurse practitioners and nurse scientists to provide evidence-based care for the country’s aging population,” said Kurth. “We are profoundly grateful for Linda’s attention to this burgeoning area and are determined to set the standard for nursing expertise at this stage of the lifespan.”

Nurses specializing in gerontology receive training specific to the needs of older people, who are vulnerable to accidents, multiple chronic illnesses, neurodegenerative diseases like Alzheimer’s and other forms of dementia, and the effects of climate change. These advanced practice nurses address the care and management of both chronic conditions common among seniors and the shifting metabolic responses to medication and treatment that accompany advanced age.

Linda credits expert guidance from gift officer Reggie Solomon ’98 for her discovery of Yale Nursing. Solomon first started working with Rodman a decade ago and has introduced her to University niches that she didn’t experience firsthand during her years on campus.

“Reggie helped us find the Nursing School,” Rodman said. “We were looking for a meaningful niche, and he suggested underfunded schools where the graduates earn less money than Yale’s other professional programs. After quickly considering the options, we realized that YSN would be a perfect match for our interests. We fervently admired what Dean Kurth is doing and took a tour of the school. The more we learned about it, the more we appreciated it. We are proud that we have enabled YSN to become an appreciably stronger institutional leader in this area.”

A trailblazer who matriculated with the first cohort of women admitted to Yale College in 1969, Rodman’s longstanding love for Yale founded during her deeply fulfilling and memorably enjoyable Bulldog days also played a role.

A History of Philanthropy

Linda and Larry have previously established an endowed scholarship at YSN with a preference for students interested in gerontology. Inspired by the contribution of nurses during the COVID-19 global pandemic, they have also generously supported the dean’s discretionary fund. 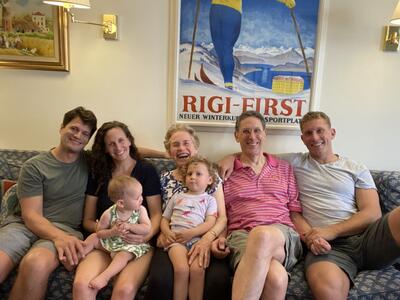 The most recent gift for the gerontology professorship is supported by their burgeoning family of Yalies, including daughter Tara Rodman ’07, son Max Rodman ’10. Tara’s husband, Jesse Wolfson ’08, as well as their grandchildren Leo Rodman and Naomi Wolfson. The family members had many passions while at Yale, including psychology, the environment, social service, theater, math, and lacrosse. However, a deep appreciation of nursing is an area they all align around.

“The Rodman Family Professorship supports innovation and capacity for the school,” said Dean Kurth, reflecting on the lasting institutional impact of professorships established at YSN.

Professorships are expected to be one option highlighted in YSN’s goals and in the university’s next multi-year, multi-billion-dollar fundraising campaign, which begins in October.